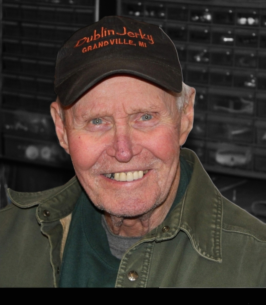 David Lee Kilgore, 86, of Battle Creek, passed away on Wednesday, September 28, 2022. He was born October 18, 1935 in Battle Creek, MI the son of Adelbert and Bertha (Tenney) Kilgore. Dave served in the U.S. Army and was a part of the Army Honor Guard in Korea. He married Sylvia Willbur on September 28, 1957. Sylvia preceded Dave in death in 2021. He owned and operated Mid-Michigan Fencing for 28 plus years. Dave loved spending time with his family and friends. He cherished his Thursday morning breakfasts with his Fine Lake group. Dave will truly be missed by all who knew and loved him.

He was preceded in death by his parents; wife; daughters: Milissa Campbell and Carrie Felder; and grandson, Donald Stillman III.

All rights reserved. This obituary is also archived at obittree.com