To share your memory on the wall of Raymond DeMott, sign in using one of the following options:

In his younger years, Ray enjoyed the outdoors, whether it was fishing, turtle-trapping, hunting or just splitting wood. Ray enjoyed being outside. Right up until the end he was cheering on Great-grand kids, visiting Utah, playing a mean game of Euchre, all with a huge Dr. Bob smile on his face. Everyone who met Ray loved him. From the little's at the volleyball tournaments to all of his neighbors who he helped just because they needed it, and he could.

A memorial will be held at a later date.

Print
A Memorial Service will be held at a later date.

We encourage you to share your most beloved memories of Raymond here, so that the family and other loved ones can always see it. You can upload cherished photographs, or share your favorite stories, and can even comment on those shared by others. 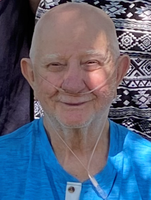