To share your memory on the wall of Vilo \"Vi\" Vaughn, sign in using one of the following options:

Vi spent many years as a homemaker, she had five daughters that she and her husband raised in the Battle Creek area. Vi also worked in the plant at Post Foods from 1949 to 1957. She and David worked at Ewing Trailers and at her daughter Carol’s A&W Restaurant. Vi enjoyed the outdoors and they spent many years traveling and camping and visiting all states but Alaska and Hawaii. Vi enjoyed reading, crossword puzzles, and playing bingo at the America Legion, Post 54, and FireKeepers. She also enjoyed crocheting making beautiful doilies and afghans. She loved life, lived it to the fullest, and loved being the creator of her very large family.

A special thank you to the nurses, aids, and staff that worked at the Calhoun County Medical Care Facility that attended to her care and made her stay pleasant.

Consider providing a gift of comfort for the family of Vilo "Vi" Vaughn by sending flowers.

We encourage you to share your most beloved memories of Vilo "Vi" here, so that the family and other loved ones can always see it. You can upload cherished photographs, or share your favorite stories, and can even comment on those shared by others.

Posted Dec 20, 2020 at 01:31pm
Our condolences to Carol and all the Vaughn family. Your mom was loved and lived a good life. I remember her smiling happy face. She and her husband visited us in Florida when we were living very primitively. Seems to me they built and outdoor “privy” for us! And this was in the 1979!!!
Rosalie Masters
Comment Share
Share via: 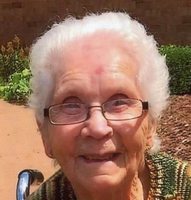